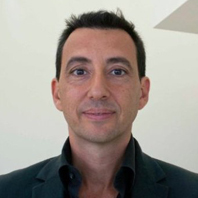 For more then twenty years, I have conducted advanced research and worked on strategic innovations in a wide range of areas and industry sectors. My work has created new technologies and user experiences, enhanced market opportunities and customer insights, and has led to dynamic new businesses. I am equally comfortable and competent in the digital and physical domains, conceiving of and strategizing web services, designing the digital ecosystem, creating ideal user experiences that enhance the touch points between digital, physical and the Web, and working with physical devices and hardware and electronic prototyping. My work has been global, multicultural, and pluridisciplinary. The focus has always been on strengthening connectivity and sustainability through human-centered design, media and technologies.
Actively promoting a unique, antidisciplinary culture, the MIT Media Lab goes beyond known boundaries and disciplines, encouraging the most unconventional mixing and matching of seemingly disparate research areas. It creates disruptive technologies that happen at the edges, pioneering such areas as wearable computing, tangible interfaces, and affective computing. Today, faculty members, research staff, and students at the Lab work in more than 25 research groups on more than 350 projects that range from digital approaches for treating neurological disorders, to a stackable, electric car for sustainable cities, to advanced imaging technologies that can “see around a corner.” The Lab is committed to looking beyond the obvious to ask the questions not yet asked–questions whose answers could radically improve the way people live, learn, express themselves, work, and play. 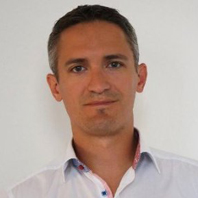 Dr. Bitzer has over 10 years of experience in innovation research and implementation. At Volkswagen AG, he is responsible for managing the Group Connect and Team Wiki projects. He is also working on the improvement of cooperation between universities and the department “Integration Technologies” of the Volkswagen AG
The Volkswagen Group with its headquarters in Wolfsburg is one of the world’s leading automobile manufacturers and the largest carmaker in Europe. The Group is made up of 11 brands from seven European countries: Volkswagen, Audi, SEAT, ŠKODA, Porsche, Bentley, Bugatti, Ducati, Lamborghini, Volkswagen Commercial Vehicles, Scania and MAN. The Group operates 94 production plants in 18 European countries and a further eight countries in the Americas, Asia and Africa. Each working day, 501,956 employees worldwide produce some 34,500 vehicles, are involved in vehicle-related services or work in the other fields of business. The Volkswagen Group sells its vehicles in 153 countries. 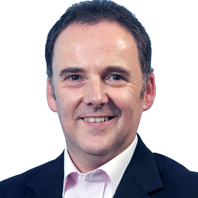 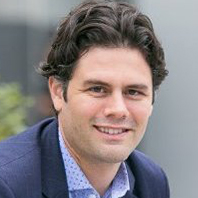 Mike has presented at several conferences globally including speeches at the United Nations in Geneva, World Bank in Washington D.C. and Google in London.  He has previously worked with and advised major brands including 20th Century Fox, Wall Street Journal, Nike, and NBC Universal. Mike has hiked Kilimanjaro and Macchu Picchu, ran with the bulls, hitch-hiked Eastern Europe and currently resides in New York City.
BNY Mellon is a global investments company dedicated to helping its clients manage and service their financial assets throughout the investment lifecycle. Whether providing financial services for institutions, corporations or individual investors, BNY Mellon delivers informed investment management and investment services in 35 countries and more than 100 markets. As of March 31, 2020, BNY Mellon had $30.6 trillion in assets under custody and/or administration, and $1.7 trillion in assets under management. BNY Mellon can act as a single point of contact for clients looking to create, trade, hold, manage, service, distribute or restructure investments. BNY Mellon is the corporate brand of The Bank of New York Mellon Corporation (NYSE: BK). 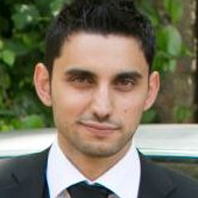 Dominic has spent his career delivering and supporting transformational IT change at Mars, Eli Lilly, and Cerner Corp. In his current role at Mars, Dominic is leading a team within the Digital Workplace organization focused on change management, specifically the adoption of modern behaviors, systems, and processes.  These vital changes will enable Mars and its 80,000 global employees to enter the next generation of a modern workplace.Dominic is a behavioral Change Management practitioner as well as Agile, MSP, and PRINCE certified.  It is the adoption of these methodologies that have allowed Dominic to challenge the status quo at Mars and enable the shifts towards Mars’ goal of being the biggest and most mutual CPG business in the world and one that attracts millions to join, stay, and grow.
In 1911, Frank C. Mars made the first Mars candies in his Tacoma, Washington kitchen and established Mars’ first roots as a confectionery company.  In the 1920s, Forrest E. Mars, Sr. joined his father in business and together they launched the MILKY WAY® bar. In 1932, Forrest, Sr. moved to the United Kingdom with a dream of  building a business based on the objective of creating a “mutuality of benefits for all stakeholders” – this objective serves as the foundation of Mars, Incorporated today. Based in McLean, Virginia, Mars has net sales of more than $33 billion, six business segments including Petcare, Chocolate, Wrigley, Food, Drinks, Symbioscience, and more than 80,000 Associates worldwide that are putting its Principles into action to make a difference for people and the planet through its performance. Mars brands include: Petcare – PEDIGREE®, ROYAL CANIN®, WHISKAS®, BANFIELD® Pet Hospital, CESAR®, SHEBA®, DREAMIES® and NUTRO®; Chocolate – M&M’S®, SNICKERS®, DOVE®, GALAXY®, MARS®, MILKY WAY® and TWIX®; Wrigley – DOUBLEMINT®, EXTRA®, ORBIT® and 5™ chewing gums, SKITTLES® and STARBURST® candies, and ALTOIDS® AND LIFESAVERS® mints.  Food – UNCLE BEN’S®, DOLMIO®, EBLY®, MASTERFOODS®, SEEDS OF CHANGE® and ROYCO®; Drinks – ALTERRA COFFEE ROASTERS™, THE BRIGHT TEA COMPANY™, KLIX® and FLAVIA®; Symbioscience – COCOAVIA® and WISDOM PANEL®. 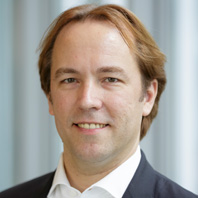 I am an experienced Strategy Consulting and IT professional. During my career at Deutsche Telekom Group, I held various positions always bridging the gap between Business and IT. In my current role, I am responsible for Design, Development and Operations of all End-User-related workplace services for Deutsche Telekom globally. Before that, I ran the internal strategy consulting team for Deutsche Telekom for Operations and IT. In that role, I was accountable for huge business transformations of the German Telco market leader (merger of fixed and mobile operations, professionalizing organisation & processes of >50.000 service staff). On the academic side, I joined executive education programs with Henley Management College in England and IMD Business School in Switzerland in parallel to my duties at Deutsche Telekom. I studied Computer Science at University of Bonn and Business Administration at University of Hagen.
It is in our nature to seek the company of others: humans need this interaction in order to move forward. Sharing fosters closeness. It is the very reason we choose to share our important moments with those important to us.We share events, experiences, and opinions – sometimes even our possessions. We share knowledge and our ideas. And quite often, by sharing these thoughts, we turn them into something bigger, something better. That is what drives us.We, Deutsche Telekom, are more than just another company, which provides society with infrastructure. Whatever the circumstances, we are a trusted companion in both people‘s private and work lives. Whenever. Whereever. Forevere making life easier for people and enriching it is our mission. 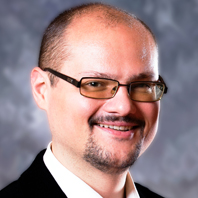 Liviu has almost 20 years of experience in business management within private ownerships and multinational consulting firms with a focus on information and knowledge management, business research an collaboration as well as extensive consulting experience in compliance services, business process engineering, internal controls, information systems design and implementation and IT project management.Since 2010 he is in a leading international responsibility in knowledge management and research, successfully developing one of the core collaboration and information management services in PwC EMEA. Starting 2017 he has taken the responsibility to lead the Knowledge&Collaboration services for PwC EMEA, Advisory.Liviu holds a management degree from Open University Business School (UK), he is Certified Knowledge Manager – CKM (Knowledge Management Institute, Switzerland), Certified ScrumMaster (Scrum Alliance), and CIMA Certificate (Chartered Institute of Management Accountants, UK).

We collaborate with our partners throughout the whole product cycle which makes the Enterprise Business Collaboration a unique event in the business and technology world. Our aim is to support them in reaching their targets and leveraging innovation. Position your business as a thought leader at the Enterprise Business Collaboration and join our business partner community today!

Position your business introduce yourself as a thought leader to senior executives. 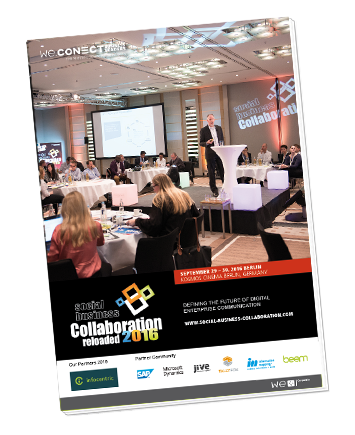 From SharePoint specialists and architects to social media experts. From digital communication strategists to UX genius. Whatever hat you wear or wherever you stand on the spectrum of digital transformation, the conference has something of interest for you. Last year we were joined by over 200 individual companies all with Enterprise Business Collaboration in their focus, so you can be sure you’ll be in good company. Here is just a sample of who was there:

200+ decision makers and over 2.5 days of networking. Don’t miss out and book your place today.

JOIN 50,000+ OF YOUR PEERSSubscribe and get regular updates, latest interviews, case studies, live presentations and more from Enterprise Communication Hub.

The most effective and most informal networking hub to reach a maximum of ROI ‒ personal dialogue, direct exchange and numerous opportunities to get meetings with top executives!

Round tables on the evening before the first conference day. The Icebreaker is a first informal networking.

Parallel round table discussions offer the delegates the possibility to talk about their own challenges.

An environment that allows participants to be guided through specific topics from experts in small groups.

The unique interactive live feedback system! Note down your thoughts on comment cards which will be pinned on walls in the networking area for further discussion.

Top speakers, trendsetters, evangelists and experts in the field share their personal experience.

With the AWARD, distinguished expertise and exceptional projects from within companies and organisations are exclusively recognised, celebrated and honoured by we.CONECT Business Leaders.

Delegates and solution providers have the chance to actively participate in product and service demos on the expo floor.

Wind down, enjoy great food and drink in a relaxed atmosphere to absorb all the new stimulations from the day.